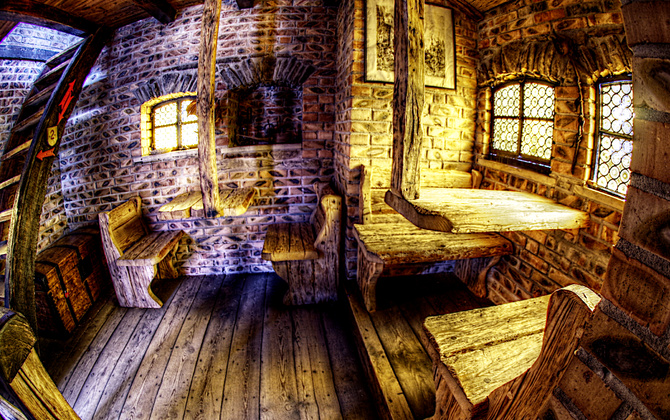 Historically, Grybow lay on one of the six royal routes, the so-called wine route. However, it is difficult to find out when and under what circumstances man appeared on the land of Grybow. We can, however, explore this knowledge by relying on material remains of our ancestors but also by listening to legends. In medieval times, there were quite a few fortified buildings around Grybow. It was here that a belt of watchtowers ran through the town, hence such names of nearby towns as Gródek, Stróżna, Stróże, Wojnarowa, or Podegrodzie. They served a defensive function. We know that life was vibrant here much earlier, as evidenced by numerous finds, such as the treasure discovered near Grybow: Roman coins and a bronze figurine from the 3rd-4th centuries AD, or the bronze hatchet unearthed a few years ago in Kąclowa, near the "Old Fairy Tale," dating from 1050 to 950 before the birth of Christ. It is unique in the whole country.

The history associated with the Old Fairy Tale Castle refers specifically to the 13th-century Mongol invasions of Poland. Historians list 149 Mongol-Tartar invasions of Polish lands, but three in particular had an impact on our history.

The first invasion took place in 1241, during which Sandomierz was captured and the Krakow-Sandomierz knights were defeated. The second invasion took place in 1259-60, at which time the Tartars captured Sandomierz and Krakow, among other places. The third invasion, in 1287-88, involved our, southern lands. It was here that the march of the invaders was stopped by Leszek the Black and Hungarian allies. Battles also took place in the land of Nowy Sącz, and the hooves of the horse of Nogai, the commander of the Mongol army, trampled the land of Grybow.

Therefore, our initiative refers to the events described above, in which our ancestors played a not insignificant role. In the reconstruction of the Castle of the Old Tale, history is intertwined with legend, which is why we cannot call it a faithful copy of the events of 800 years ago.

Who could reach the whole truth lost in the darkness of time? However, the mysterious tunnels and caverns that were uncovered on the site of the castle by a flood in 2010, and which we are still working on reconstructing, may indicate that there was a defensive stronghold on one of the surrounding mountains in the past. There may have been secret passageways used to lead the population into the surrounding forests in case of danger. They may also have been used to deliver food during a siege of the stronghold, to bring outside help to the defenders or to send secret emissaries with news. We do not yet want to reveal all the facts at this stage. Reconstruction work is still underway at the Old Tale Castle. Those interested in the history of Bolko's fate, I refer you to the book titled. "The Old Tale. The Legend of the Castle of Bolko the Angry."