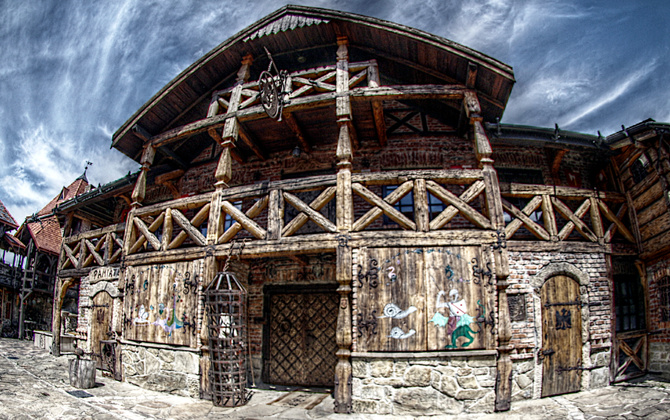 A few words about us

The Old Tale Castle is a reconstruction of a medieval fortified castle, based on the history of the Tatar-Mongol invasions of Polish lands in the 13th century. According to legend, the castle was founded by Bolko, called Gniewny, who, during the third great Mongol expansion into Polish lands in 1287, stopped the invasion of the troops of the descendant of Genghis - Khan, Nogai, and the commander of the Golden Tatar Horde, Teleboga.
The reconstruction of the castle is a timeless initiative linking the past with the present.
Why? - is the most frequently asked question by visitors to the Old Tale Castle.

Some philosopher said that our lives depend on seemingly small coincidences. I have had many encounters that have guided my plans. For example, while on a business trip to Crimea (a friend of mine wanted to build a hotel on the Black Sea), we visited the capital of the Crimean Khanate, Bakhchisaray, as well as the medieval fortress city of Chufut-Kale and the nearby Uspensky Monastery, the monastery of the Dormition of the Mother of God carved into the rock in the 8th century by Greek Catholics.

Puzzled, I watched buses arriving one by one, a string of tourists and pilgrims laboriously climbing the hill, at the top of which were a high staircase and the entrance to the monastery. The rock was covered with various paintings from centuries ago. I looked at this and the question rang in my head: how did someone want to incur such an effort and create all this? And at the same time I was aware that thanks to this after so many centuries people still want to admire it.

This question - "how did someone want to?" - I asked myself in many places, traveling around the world, and slowly a resolve was born to create something unforgettable, based on the rich history of the land where I come from, that would make the region famous, raise its profile and contribute to its development.

Added to these dreams was finding the roots of my ancestry. My search led me to Florence, Leczyca, and even to present-day Belarus - here I came across the history of the eastern branch of the Bronski family from the Borderlands, described in the book "The Bronski House" (Philip Mardsen of Cornwall), and through it I also found traces of the family from the early medieval period in Scotland. Thus, out of dreams, the history of our land, our own roots, and a longing for a simpler world, the "Reconstruction of the fortified castle of the Old Fairyland in Grybow, founded by Bolko, called Gniewny" was created. Although there is the word "fairy tale" in the name, the castle is real, and here you can immerse yourself in the darkness of history and try to understand the meaning of the passing of time. Hence the motto above the main gate: "Time is a shadow."

Out of love for history and promotion of our region, the Old Tale Castle became the headquarters of the "Old Tale Association", whose goal is to promote our history and culture, mainly of the Old Polish period. The Polish flag flies at the castle all the time, I am a patriot. I want to show that as Poles we are creative and hardworking. Such activities also give hope to the local community that something meaningful can be done in regions where not much is happening. And they are supposed to keep young people here, who often flee to big cities. After all, a whole economic infrastructure can be created around such projects so that the region develops and provides jobs. I hope that someday this will be the case here. For now, we are trying to be a springboard for artists, scientists, who have a place to meet, present their achievements, inspire themselves for further work.

We are proud that this place attracts not only Poles, but also foreigners.
On the well-known tourism platform Tripadvisor, we received the prestigious Travellers' Choice 2020 award in the category of Polish attractions.

While working on this project, there were both ups and downs, moments of doubt. 21 years of blood and sweat - in other words, a certain stigma. But now we have a sense of pride in having achieved something that at first glance seemed impossible.

As of today it is:

The headquarters of the Association organizing various initiatives in the field of history and culture,
museum of history
a place for excursions for the youngest entitled. "Lessons of living history"
historical feasts and various events are organized
developing accommodation part
a medieval wellness and spa is being created